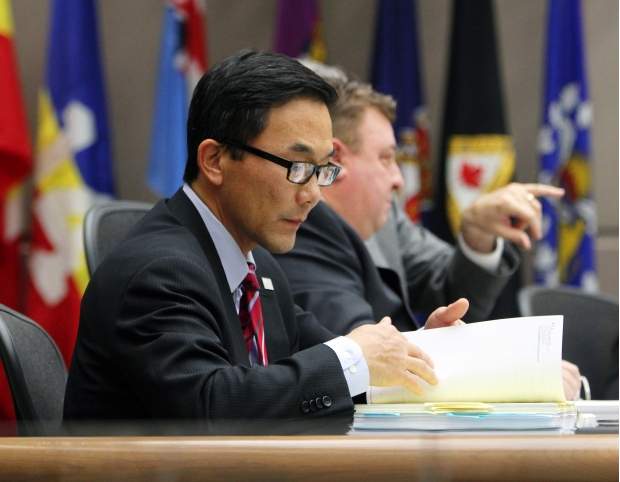 In 2017 Sean Chu campaigned on bringing Green Line LRT to Ward 4, but today he's missing in action while other Councillors plan to kill LRT to North Central Communities.

Ward 4 Communities Have Been Overdue for LRT for Decades

I grew up in Northwest Calgary. The affordability of new suburban communities enticed us to move from our little apartment on 16 Avenue to further north. My family still calls this area ‘home’ today, though I didn’t always appreciate it.

Calgary, to me, was my cul-de-sac, Shaganappi Trail, and Country Hills Blvd. We would drive these roads every day to get to school, the grocery store, church, and the occasional trip to Nose Hill Park. Downtown was always an adventure. I found it exciting, but my family seldom travelled to the inner city, as my parents would say it was “too far” and “too busy”.

It wasn’t until I hit my teenage years, when I was allowed to ride the bus, that I really got to know my city. With access to Transit, I began to appreciate the communities, libraries, and parks Calgary offered. I could get anywhere I wanted, it just took 3-4 transfers, and up to 45 minute wait times between shuttle busses.

Spending 3 hours every day on our beloved Calgary Transit vehicles was frustrating, to say the least. “Why isn’t there a train up here?!” I’d exclaim to anyone listening, dramatically dropping my backpack coming home from school. Years later, I still share my younger self’s grievances.

People who don’t take transit often don’t understand how frustrating transferring between 3-4 buses or trains can be. Transfers usually involve long waits in the cold outside. Any delay can be compounded by missing, or waiting longer for, your transer. Many Calgrians in the Northeast, Northwest, West and South already complete the majority of their trips on LRT, which is by far the most comfortable and reliable option. I believe that Calgarians in North-central communities deserve LRT too.

Little did I know that a plan to bring a train to my neck of the woods was already in the works: The Green Line, a massive train line connecting opposite edges of our city to each other. Many political leaders and City workers have paved the way for this plan for decades.

According to his campaign website, Councillor Sean Chu is one of these leaders. In 2017, Councillor Chu said, “I never back down from a challenge, and I will not back down now. I, along with our local MP, worked hard for the initial funding, and I will not stop focusing on this issue until the City achieves the savings and funding it needs to get the job done 100%.”

Fast forward to today, and a number of Councillors led by Jeff Davison have revealed plans to use delay tactics to kill LRT to North Central communities, but Councillor Chu is nowhere to be found when we need the local councillor to be advocating to get the LRT across the river to 16 Avenue N.

As Some Councillors Revealing Their Plans to Kill LRT to the North, Sean Chu is MIA

'2020 Councillor Chu' is unfortunately not as bold as '2017 Councillor Chu'. His comments at the June 1, 2020 Green Line Committee meeting are cause for concern. He said he is supportive of the Green Line, but stopped short of advocating in support of the updated Stage 1 alignment that brings LRT across the Bow River closer to Ward 4. If Council does not approve the updated Stage 1 alignment, residents in Ward 4 and northern communities may never see LRT in their lifetimes. I know my younger self would be reeling at the thought.

Will Sean Chu Make Good on His Campaign Promise to bring the Green Line LRT to Ward 4? 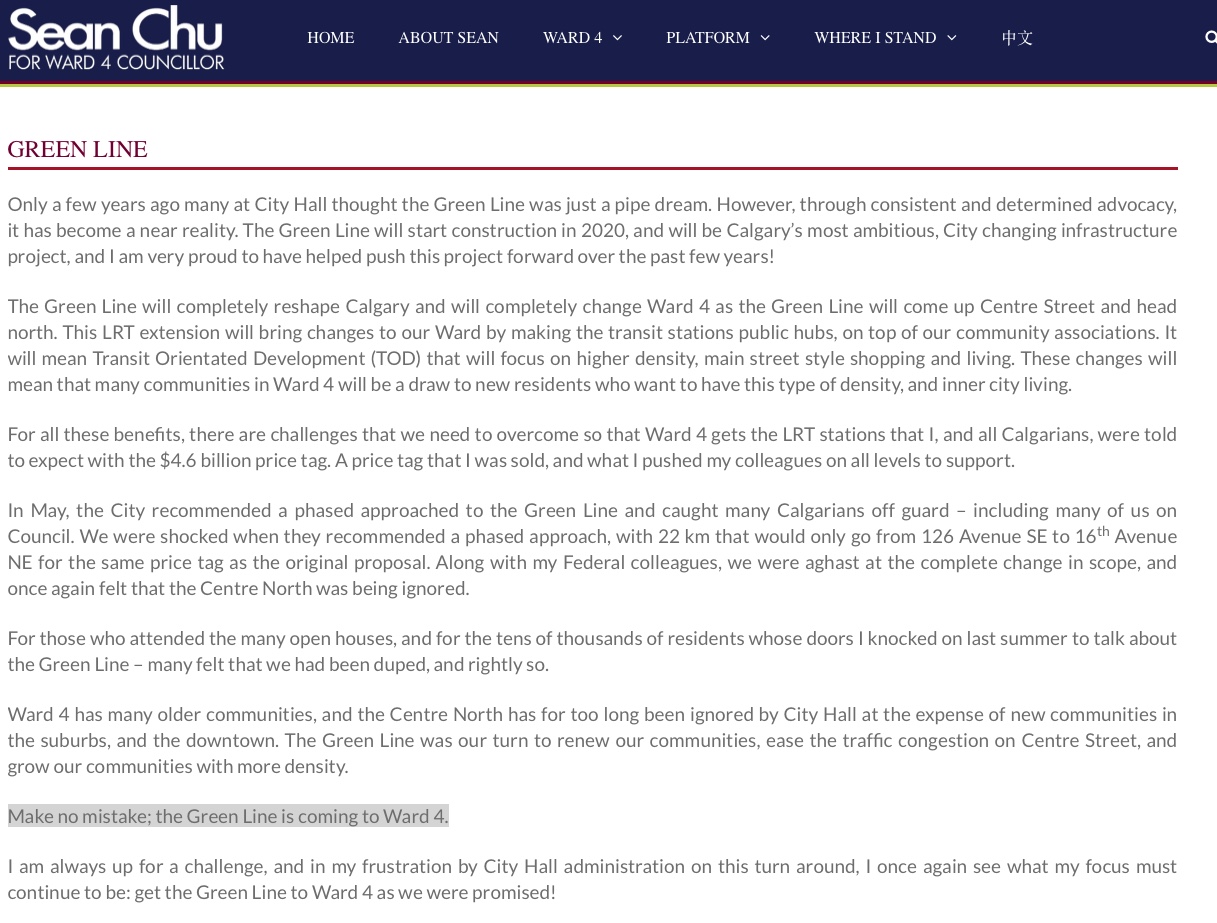 If I can remember my frustrations with Calgary Transit 15 years ago, I’m sure Councillor Chu can remember campaign promises he made only 3 years back. “Make no mistake, the Green Line is coming to Ward 4,” he said in 2017. Fast forward to 2020 and Council is on the verge of killing LRT to the north.

If Councillor Chu wants to fulfill his campaign promise and see a Green Line reach Calgary’s northern communities any time soon, he should be advocating for City Council to approve the Updated Stage 1 Alignment. Make the bold decision today, build over the river, so that North Calgarians can use the Green Line tomorrow.