Councillor Jeff Davison knows how to kill a deal. In fact, he mapped it out in the Calgary Herald almost a year ago. Davison explained some of the cunning tactics being used by opponents of publicly-subsidized arena in Calgary:

“And, let’s be honest those calling for delay are only interested in killing the deal. It’s the same tactic used by pipeline opponents and we should be under no illusion about their agenda.”

A year has passed and Councillor Davison is one of the loudest voices on council pushing to delay building the North Central leg of the Green Line LRT. The Globe and Mail Editorial Board wrote that severing the Green Line would be a “generational mistake to fall prey to myopia”.

Last week the public was given an opportunity to speak to a committee tasked with approving the Phase 1 plan of the Green Line. Before making a decision, Davison could have listened to two days of passionate presentations from Calgarians who want better transit service. Instead, Davison posted a letter to his website before the Committee meeting, calling for the Green Line LRT to be cut for north-central communities and replaced by busses.

The letter which was co-signed by three of his fellow councilors, argues that because the Green Line is set to be built in phases, it should in fact be looked at as two separate train lines.

According to Davison’s plan, the Green Line is now a “two line project”. It is difficult to parse the exact definition of what makes one train line actually two train lines. The order it is built? The presence of a bridge? A water crossing?

Either way, it seems Davison believes only what he refers to as “Green Line south” is worthy of the cost. No date is proposed for extending the Green Line north of the river. Instead, Davison and company say those communities should be provided with a less expensive “dedicated north BRT”. 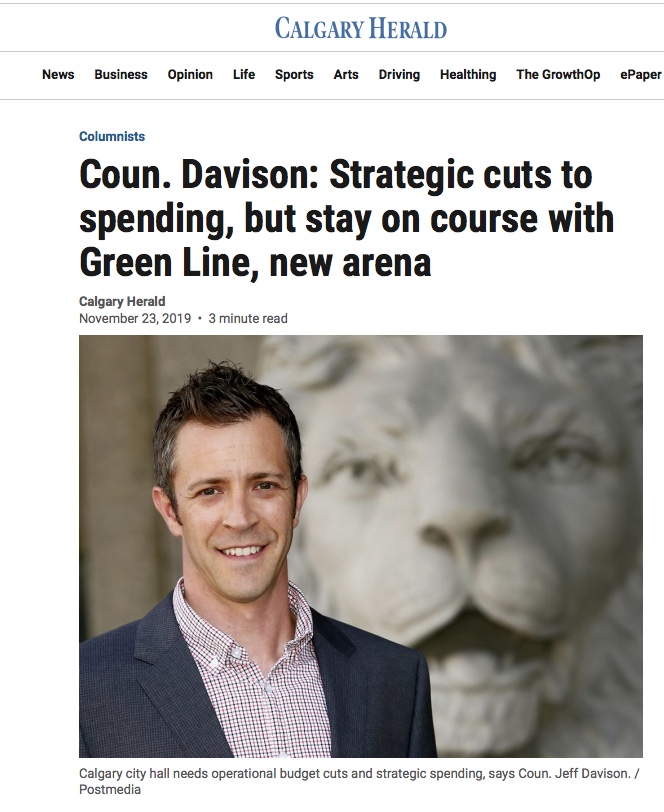 The question remains why councilors like Davison deciding now is the time to walk away from jobs and billions in funding promised by the Provincial and Federal governments. Can Calgary afford to leave economic stimulus on the table and walk away in 2020?

Granted, a lot has changed in the months since Davison led negotiations to use $290 million in public funds to build an arena. Davison’s proposal cites the “current pandemic” as a major reason the new LRT line should not be built in the north.

Davison even has the nerve to include how “COVID-19 has highlighted the importance of often undervalued essential workers” while arguing against a project that would improve their commutes for the coming decades.

In reality, Davison was advocating to “split the line” in the pages of the Calgary Herald 6 months ago, long before COVID changed the way we look at how we build our communities in the future.

However, Davison has already submitted amendments to the updated Stage 1 alignment to be considered by Council on June 15th, revealing their plans to further delay LRT to North Central communities and risking the future of LRT ever reaching Centre Street North.

Davison admits that it is “north-central Calgarians who have not seen meaningful transit improvements in decades.” His proposed amendment guarantees that this will remain the case for decades to come.

Marc Affeld is an elementary school teacher at a public school in Calgary.