Last chance to email City Council to let them know you're counting on their vote for the Community Safety Investment Framework !

Please email your councillors to show your support today, to make sure that they pass the Community Safety Investment Framework and provide more funding for our communities.

Check out the petition map! Over 2,000 Calgarians from all across the city have signed our petition calling on City Council to reallocate Calgary Police funding to reinvest throughout our communities, to rebuild trust and to rectify systemic barriers. 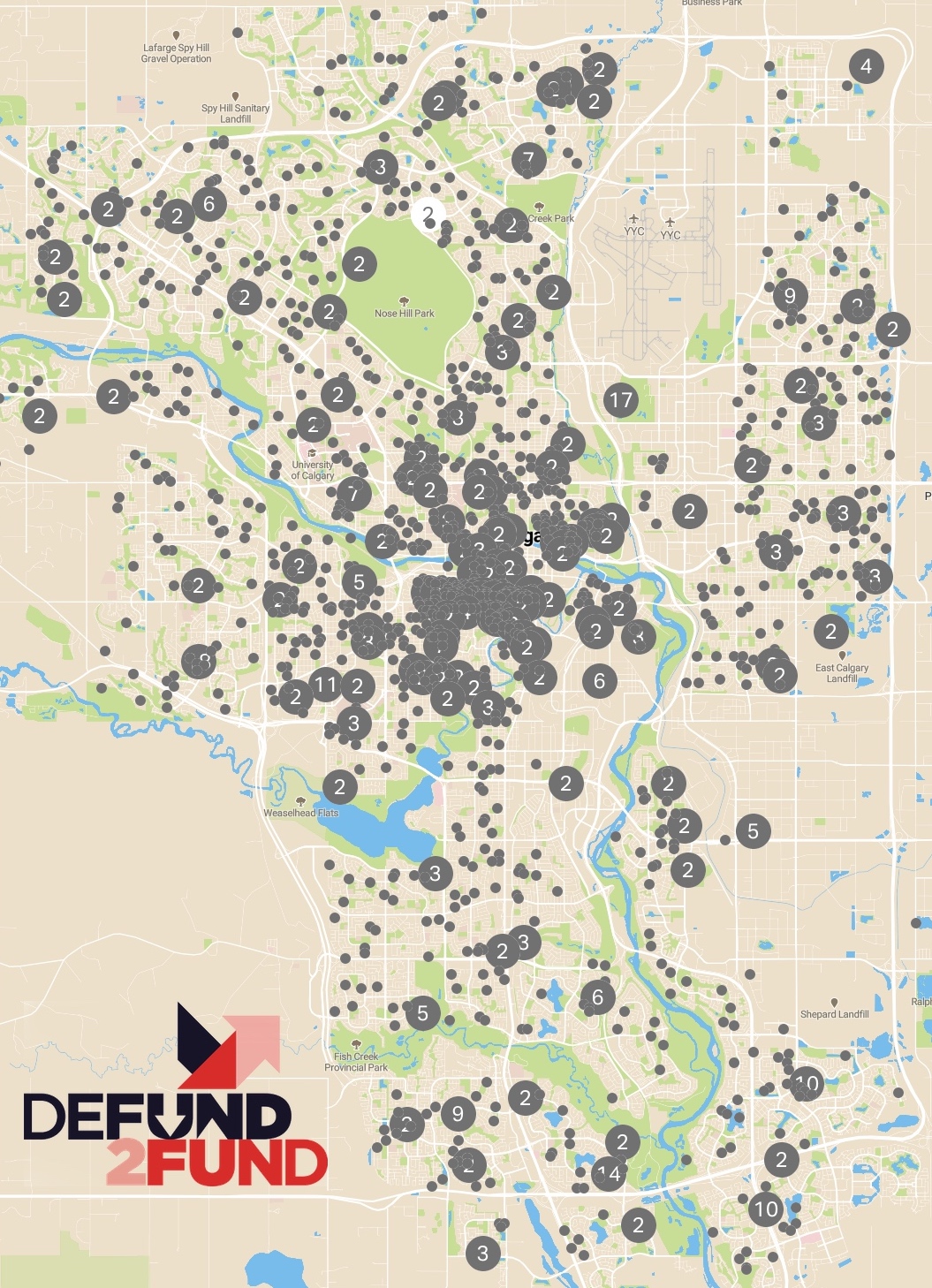 Read the message Defund2Fund delivered to City Council this week alongside our 2,000+ signature strong petition in advance of their Budget deliberations👇

We must always begin from a position of humility. Thank you for continuing to provide the opportunity for the public to have input into the challenging work done by City Administration. The Defund2Fund Coalition came together during a very contentious year; however, the systemic discrimination faced by marginalized communities that brought us together has persisted since the very first stone was laid at City Hall.

Let’s begin by setting the record straight. Defund2Fund does not shy away from those contentious words, “Defund the Police.” Those words are a part of our reality. It is very simple. The Calgary Police Service (CPS), like many systems at play in Calgary, have consistently been a marginalizing force. We cannot forget that the very land we live on was gained through enforced state violence against Indigenous peoples. And the impacts of that historical violence reverberate through our colonial justice system today, through the overrepresentation of Indigenous peoples in custody, and the blatant disregard for Indigenous justice systems consistent with Treaty and Indigenous rights of Indigenous peoples. Colonial violence sets the stage for the issues we are experiencing today.

The safety systems in Calgary that are meant to ensure our citizens are secure and cared for are currently underfunded, understaffed, undertrained, and outgunned by their need across our communities. Instead of supporting these programs, City Council (not alone in our national landscape) have left it to the CPS to fill this void. The CPS is overworked, undertrained, and in many ways, unaware of their role in the systemic abuses faced by marginalized communities across Calgary.

Yes, we have said Defund the Police. This is because we believe that money can be spent elsewhere and that there are better services available to support the communities in need. Change must come at a cost. That cost should come from the organization that has been tasked to care for those communities in need, and has failed in those aspects of its duties. Let the CPS do their job, not the job of our social institutions.

We have strong support:

We are asking Calgary City Council to reallocate a portion of the existing CPS budget - the $401 million budgeted for 2020 - to fund the community services we need.

Historical Review of the Police and the Police Budget between 1999–2019:

Rationale: The Defund2Fund Coalition believes that our public institutions have a duty to be financially responsible. The data is clear, the CPS has a bloated budget. There are two key reasons why funds should be reallocated from the police budget:

We need your help!

1. Email City Council and ask them to vote for the Community Safety Investment Framework

Tell your Councillor that you support the Community Safety Investment Framework, and that you want them to vote YES!

A personal approach works best, but don’t forget to tell them that:

Be sure to add something personal!

2. Call City Council and ask them to vote yes to the Community Safety Investment Framework

Most councillors are currently working from home but you can still leave them a voicemail by calling 403-268-2430. If you’re not sure what to say, include the ideas above!