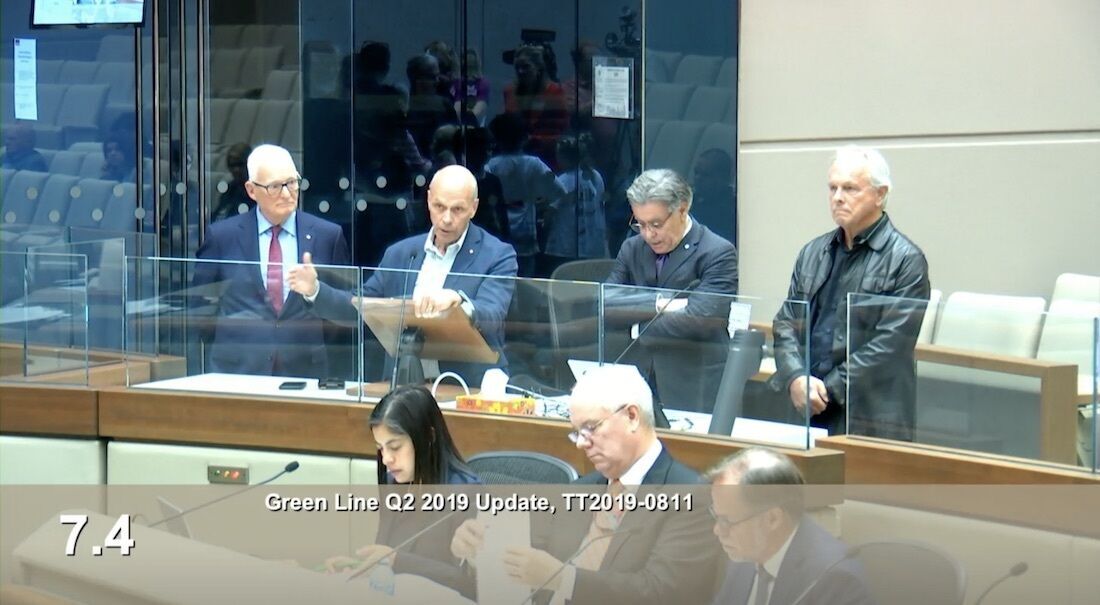 A vocal few in Calgary are campaigning to derail the approval of a new LRT line in Calgary. Using a downturn to build opposition to public transit, through op-eds and public relations. Grand predictions of disruption to communities who stand to benefit from improved rapid transit service. Sewing distrust in transit planners and citizen engagement. Sound familiar?

This is nothing new in Calgary, and it looks like history is once again repeating itself. Let’s take a trip down memory lane...

Over 40 years ago, Vancouver-based land developer Jack Poole co-founded Daon Development Corporation. In 1977 Daon, then North America’s second-largest real estate development company, began arguing against the construction of the start of the LRT system in Calgary.

According to the Calgary Herald, a former city planner hired by the company claimed that “it is a bit of wishful thinking to imagine that the LRT can be a success.”

Calgary Herald February 11, 1977 headline features the story of a battle that was waged and later (thankfully) lost, to derail plans to build the first stretch of Calgary's LRT system. (Click to enlarge)

This LRT line, which Daon Development said was “too spread out” to properly service the city, was eventually opened in 1981 and is known today as Calgary Transit’s Red Line. This investment kickstarted a system connecting all four city quadrants, serving over 300,000 riders a day, making it among the most successful LRT systems in North America today.

As today, in 1977 opponents of building LRT in Calgary hired a former Calgary city planner to lead their "attack".

1982 opposition to Northwest LRT Expansion: “City would be wise to reconsider”

Further expansion of the C-Train in 1982 again raised the hackles of the anti-transit brigade, who polished several old chestnuts about the purported “economic risks” of providing Calgarians with accessible transit options. Even back when Mork and Mindy was still on air, critics were opportunistically saying that the city must operate like a household, and  “[make] do with an old car and an old house, and [buy] only the necessities.”  They also imagine that “there may be things much more important than LRT,” which may sound familiar to anyone following along these days.

Calgary Herald, May 20, 1982, reported then Calgary Mayor Ralph Klein's resolve to build the Northwest LRT expansion in spite of opponents calling for delay during the economic downturn at the time. (Click to enlarge)

Even free market evangelist and then-Mayor Ralph Klein could see that the new rail line was a deal too good to pass up. In 1982 Klein pointed out that investments in transit, even during downturns, put the city back in “good shape” when boom times come again. With 300,000 riders per day today, we can count our lucky stars that Ralph Klein (hardly a European urbanist) was willing to put his “‘political butt’ on the line” to push the provincial government to fund public transit in Calgary 40 years ago.

In fact, we should all be thanking those who worked to improve Calgary’s transit options four decades ago. We know today that loud, anti-transit voices often get attention in the form of newspaper columns and unearned credibility among decision makers in the city. However, we can see now that yesterday's warnings about public transit being too risky or costing more than it is worth have been proven wrong time and time again. So when the same forces start to roll out the same tired arguments, we need to have the foresight to invest and build today for the future -- not delay or push off problems for another day.

Had Calgarians listened to these voices in the 1970s and 1980s, we would not be living in the same vibrant and connected city where we live today. Let’s do the same favour for Calgarians in the 2050s, leverage the combined $3 billion federal and provincial investment on the table and move forward with building the Green Line for tomorrow and future generations.

Marc Affeld is a public school teacher working to advocate for more accessible public transit options in Calgary. He worked as the News Director and radio producer at CJSW 90.9FM in Calgary and co-created popular Canadian History Podcast "Today in Canadian History".